The Molten Salt Reactor is my favourite reactor. It cannot melt down, it is already a liquid. The IFR is a great reactor, but it uses explosive sodium to prevent overheating. (Yet remember, it is designed so that the sodium never comes in contact with water, and the sodium gives it enormous advantages over very high-pressure-cooker water reactors).

But the Molten Salt Reactor uses chemically stable liquid salts like fluoride and chloride. These salts do not explode if they come into contact with water. The main reason that I promote the Integral Fast Reactor first is that the R&D for this reactor is basically done. It’s ready for commercial testing and deployment. But the MSR is still back developing the prototype. It has not had a full prototype testing phase yet, not like the decades the IFR has had in the EBR2 prototype.

It cannot “melt down”, it is already a liquid! 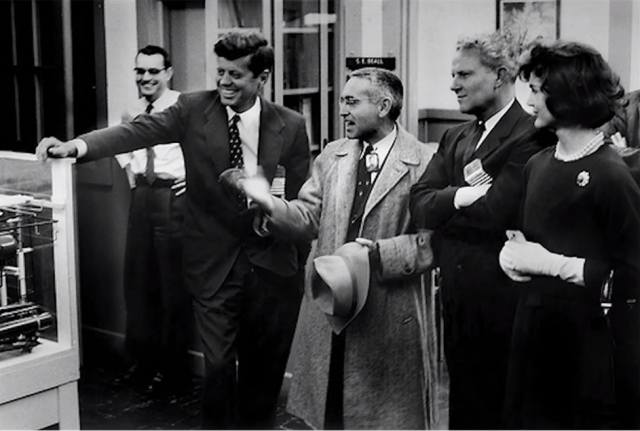 SAFETY: It *cannot* melt down as it is already a liquid. If the fuel overheats it expands and the atoms move apart, reducing fission and cooling the reactor. It is self-limiting and self-cooling. Also, a Molten Salt Reactor requires power to hold the liquid fuel up in the reactor. If the power fails, the liquid salt drains out of the reactor into safety tanks that shed nuclear-decay heat and absorb neutrons (stop the fissioning). Win win. How does it hold up in the reactor core? Power supply runs a fan blowing freezing gas across the drain pipe. The hot liquid salts only have to get under 450 degrees to ‘freeze’ and trap the hot molten salt above. In a power failure, the fan stops blowing, the ‘frozen’ salt plug melts and the reactor fuel drains away to safe drain tanks under the reactor where it spreads heat and dumps neutrons into the surrounding drain tanks. 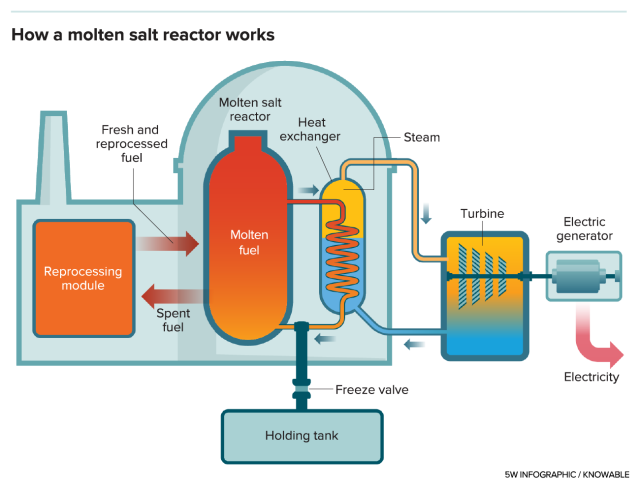 The diesel generators at Fukushima were knocked out and failed to cool their solid fuel reactor, causing a meltdown. But when was the last time gravity failed?

😉 Power failure = automatic shut down, with or without technicians. Even if someone shot an armour piercing bullet through the reactor, the liquid salt would drain out of the core and into the containment room and the liquid salt dries hard at 450 degrees C. It wouldn’t burn and boil off across a continent like Chernobyl did, it’s stuck in the salt crystals.

BREEDERS EAT NUCLEAR WASTE! They effectively ‘recycle’ spent fuel, getting 90 times the energy out of once-through reactors. This means the UK’s spent fuel rods could run her 500 years, and America’s would last a millennium! Uranium from seawater is ‘renewable’ as geological processes and erosion constantly top it up. It means nuclear power is now renewable — that uranium from seawater will last billions of years.

For years the Liquid Fluoride Thorium Reactor was my favourite salt reactor, but the Molten Chloride Salt Fast Reactor is now my new favourite. Please not that I’m convinced that almost any reactor is better than coal, and any modern breeder reactor that eats nuclear waste is better than any normal reactor. There are lots of great breeder reactors I like, including the Integral Fast Reactor and the LFTR. This isn’t a ‘good vs bad’ list, but a best of all the possible good. But I must lay my cards on the table. In a nutshell, the MCSFR is safer, easier, and cheaper to build and run. But let’s look at more details below. (Thanks to Ed Pheil for his patience in breaking all this down into English for me!)

NO SEPARATION OF REAL WASTE FOR DECADES! While breeder reactors ‘eat nuclear waste’, nuclear waste is a complex mix of stuff and some of it will eventually become fission products — the broken atoms that must one day be extracted from the reactor. Fortunately we can melt this final waste into ceramic tablets and store it under the reactor park for 300 years and then it is safe. It’s only 1 golf ball per person or 1.25 Olympic swimming pools for 70 years of clean energy for 25 million Australians. But here’s the real miracle — the MCSFR can run for 40 years or more without extracting wastes, but other molten salt reactors like the LFTR must do it all the time. The diagram above shows a typical LFTR fuel reprocessing chemical plant off to the left of the reactor. That’s more industrial pumps and equipment per reactor, and more expense. The simpler MCSFR is cheaper.

NO BLANKET REQUIRED. The LFTR requires a nuclear ‘blanket’ around the reactor. If nuclear waste is like wet firewood that must be put around the edge of your firepit to ‘dry out’ (absorb neutrons), the blanket is the brick ledge you built to sit wet firewood on without burning. It’s a special drying rack around your firepit. In a LFTR version of the molten salt reactor, it’s an extra layer of expensive industrial plumbing around the reactor core, where the fertile actinides sit and soak up extra neutrons and become fissile (our wet firewood drying metaphor). But think of the MCSFR as such a big super-hot bonfire, you can just chuck the ‘wet firewood’ straight into the fire. The physics and chemistry of fast reactions in chloride salt is simpler than fluoride salts, and allows a simpler more elegant reactor with a lot less plumbing. The LFTR only burns thorium feed, but the MCSFR uses any actinide or waste. More wastes and warheads and fuels can just be dumped in! Got some chunks of plutonium from a bomb? Into the fire! Old fuel rods from a reactor core? Cut them up, and in they go!

ANTI-PROLIFERATION: Other waste-eating breeder reactors use various fuel reprocessing steps outside the reactor. This could be as many as 7 chemical reprocessing stages! Some worry that these stages could be fine-tuned to siphon off bomb-grade material. That’s a nuclear weapon’s proliferation risk — or it *could* be to the very paranoid. (I’m convinced that if we didn’t have the MCSFR option, good governance and inspection regimes and video surveillance would prevent any proliferation risks in IFRs and LFTRs and other breeder reactors during fuel reprocessing. Bomb-making equipment and processes stand out like a sore thumb!)

But the MCSFR just outright bypasses the whole reprocessing stage. Old fuel rods are cut up a little, then thrown directly into the hot molten salt core, zirconium cladding and all. The coating on the fuel rods will one day bubble out as particulates. It also helps bypass anti-proliferation laws in America. As nuclear engineer Ed Pheil told me, “Conversion of SNF to Chloride de salt fuel is not reprocessing according to NNSA. This process supercedes the ANL processes for pyro-processing by reducing it from 7 chemical steps to 1 chemical step. Pyro-processing involves Plutonium and uranium separations, and we separate nothing, but oxygen, so no proliferation concerns.”