As the wiki says, “The most common threat to water security is water scarcity. There can be several causes to water scarcity including low rainfall, climate change, high population density, and overallocation of a water source. An example of periodic water scarcity in the United States is droughts in California. Another category of threats to water security is environmental threats. These include contaminates such as biohazards (biological substances that can harm humans), climate change and natural disasters. Contaminants can enter a water source naturally through flooding. Contaminants can also be a problem if a population switches their water supply from surface water to groundwater. Natural disasters such as hurricanes, earthquakes, and wildfires can damage man-made structures such as dams and fill waterways with debris.”

Israel uses desal and recycling more than most countries

Israel have also built more desalination plants per capita than any other country on earth. Over half their population get their drinking water from desalination plants. Israel built 5 plants in the last 10 years to achieve this. While energy intensive, it only accounts for 3% of Israel’s annual electricity use to get 50% of their drinking water from the Mediterranean ocean. They have gone from water poor to water wealthy, and could soon be exporting water.

Israel are the world’s largest recycler of grey and black water for agricultural use, with local rural townships supply cleaned up waste water for local agricultural products in what would otherwise be desert. Their drip irrigation method saves 40% of the water usually used, and yet gets 50% better crop yields.

Qualification: Israel’s strategy appears to rely on high density populated townships in the deserts to efficiently recycle their grey and blackwater, focussing that cleaned up water into local agricultural projects as appropriate. I doubt this strategy would work over much larger areas, like moving waste water from Africa’s cities to the Sahara (a long distance indeed) or from China’s cities all the way up to China’s growing Gobi desert. Other more energy efficient, local and natural strategies are required for such vast areas.

The video above also mentions farming fish from salty underground desert water, and then feeding that salty, fish-waste water to salt-tolerant plants that love all the extra waste nutrients.

Then there’s the Tal-Ya water box, a dew-catching tray that pulls the dew directly out of the air and funnels it to the plant. It can be used alone in some areas, or for dryer locations be used in conjunction with drip irrigation as well for maximum efficiency. 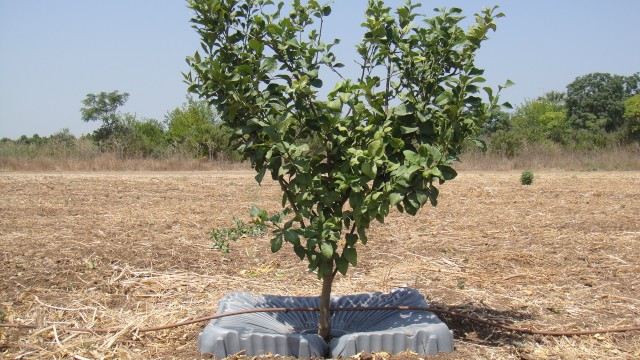 The Dutch also invented something similar with the Groasis Waterboxx designed specifically to establish trees in areas undergoing desertification. It collects dew and infrequent rain, and slowly releases it to the plants roots, promoting deeper root growth.

The wiki has an interesting list of advantages and disadvantages. One that strikes me is the sheer economics of setting up drip irrigation must mean that in a desert country, paying for plastic piping infrastructure must be cheaper than paying for the extra water a cheap giant surface farm sprinkler could distribute.

The advantages of drip irrigation are:

The disadvantages of drip irrigation are:

Seawater greenhouses to green the desert

Anywhere you have desert next to the oceans, you can turn seawater into food and freshwater and a local green oasis. But this is such a big topic I devoted a whole RULE to it, see 8. REGREEN DESERTS.