1. 10 times more protein from the same amount of vegetation

Cows convert grass into protein. They eat grass to feed the bacteria-factory in their guts that gives them protein, and then metabolise that into their bodies. But they’re not just growing protein. Cows grow large cow sized heads and hearts and lungs and bones and have to run their bodies at 38.6 degrees Celsius (hotter than humans). That’s a lot of extra organs and energy wasted. Insects don’t need all that. As a result, insects give us 10 times more protein from the same amount of grass.

2. Economic benefits: as the wiki says:–

Insects generally have a higher food conversion efficiency than more traditional meats, measured as efficiency of conversion of ingested food, or ECI.[80] While many insects can have an energy input to protein output ratio of around 4:1, raised livestock has a ratio closer to 54:1.[81] This is partially due to the fact that feed first needs to be grown for most traditional livestock. Additionally, endothermic (warm-blooded) vertebrates need to use a significantly greater amount of energy just to stay warm whereas ectothermic (cold-blooded) plants or insects do not.[78] An index which can be used as a measure is the Efficiency of conversion of ingested food to body substance: for example, only 10% of ingested food is converted to body substance by beef cattle, versus 19–31% by silkworms and 44% by German cockroaches. Studies concerning the house cricket (Acheta domesticus) provide further evidence for the efficiency of insects as a food source. When reared at 30 °C or more and fed a diet of equal quality to the diet used to rear conventional livestock, crickets showed a food conversion twice as efficient as pigs and broiler chicks, four times that of sheep, and six times higher than steers when losses in carcass trim and dressing percentage are counted.

Insects reproduce at a faster rate than beef animals. A female cricket can lay from 1,200 to 1,500 eggs in three to four weeks, while for beef the ratio is four breeding animals for each market animal produced. This gives house crickets a true food conversion efficiency almost 20 times higher than beef.[22]

For a 5 minute summary:

Or this hour long BBC Documentary for more.

Some us the insects to convert food waste into new pigs and poultry and even pets!
As Reuters reports:

Enterra Feed, one of an emerging crop of insect growers, will process the bugs into protein-rich food for fish, poultry – even pets. After being fattened up, the fly larvae will be roasted, dried and bagged or pressed to extract oils, then milled into a brown powder that smells like roasted peanuts.

“This pioneering work is currently at the proof-of-concept stage,” Nicola Robinson, McDonald’s Corp sustainable supply chain manager, told Reuters. “We are encouraged by initial results and are committed to continuing to support further research.”

5. Black Soldier Fly farms can process 1 ton of organic waste a day in just over 4 by 4 metres!

When organic waste goes to a BSF farm, it is eaten by the fly larvae. After only a few days, the larvae mature to pre pupa and pupa stages, when they can be harvested. These insects are very nutrient rich, containing about 5% calcium and 42% protein by weight. This high protein composition means that about 1 gram of these insects can yield 2.4 Kilograms of protein after only  18 days. That’s enough protein to feed over 40 adult humans (using an average recommendation of 56 grams per day). These high percentages of calcium and protein also are what make Soldier Flies ideal ingredients for fish, poultry, and pig feed markets. Currently, some state and federal regulations limit acceptable uses for such insect based protein ingredients. However, there could be larger feed related market opportunities on the horizon for these insects.

Their large appetites, short life cycle, and high reproduction rate make Soldier Flies ideal for handling large amounts of food waste. One female fly alone can lay anywhere from 400 to 900 eggs, and it only takes 12 days for those eggs to hatch and grow to adulthood. Also, since 1 square meter worth of Soldier Fly larvae can eat about 15 Kilograms of waste per day, a BSF farm would only need about 180 square feet of flies to process 1 ton of organic waste per day.

Unlike many organics outlets which require animal byproducts to be processed separately from plant based food waste, Black Soldier Flies eat almost any type of organic waste. This includes things like meat, fat, dairy, and most other food and beverage wastes. However, these flies do show a preference for calorie rich foods, and are unable to process high cellulose materials (like grasses, cardboard, or paper based products). Fortunately, BSF farms do typically accept paper based products like this as part of an organics stream; the material would just be considered an acceptable contaminant.

Another key benefit to using Black Soldier Fly farms is that they usually accept contaminated waste steams. For instance, if a food or beverage manufacturer had pieces of metal or plastic that contaminated a load of products, that waste material could potentially be sent to a fly farm. Or if a company realized an entire load of food products had been packaged but was off spec, this packaged organic waste could potentially go to a BSF farm.

The reason these fly farms can process contaminated waste is due to the unique life cycle of the Soldier Fly. Soldier Flies actually only eat during the first 4 or so days of their life. This is when they are in the larvae stage. After this stage, Soldier flies begin to pupate, during which time their mouths turn into appendages used for climbing, and the flies climb away from food sources, seeking instead dry, sheltered places. This migration away from the food waste causes a natural harvesting process, which fly farmers can use to easily separate the fly pupas from the waste materials. These pupas are then what farmers harvest to produce the protein rich animal feed ingredients. Since the pupas cannot yet fly away, it is easy for farmers to separate some for harvesting and some to mature for breeding. Overall this makes for a very efficient and sustainable process for removing contaminates from organic waste.

Insect burgers are now sold in Germany. The Guardian explains:- “It’s quite simple. You have to create an aesthetic product that looks good and doesn’t show any insects,” Özel said, adding that people were attracted by the smell of the burgers. 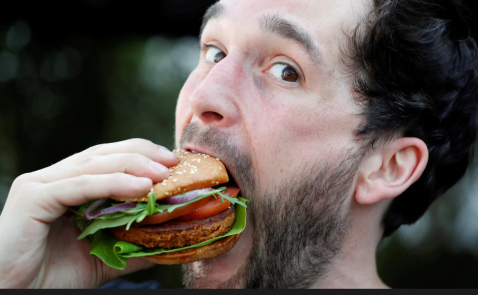 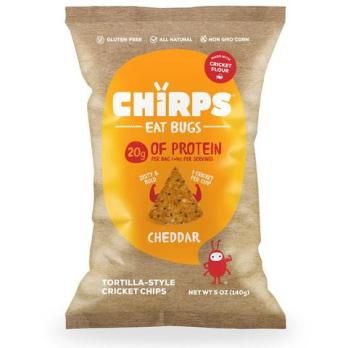 Again, insects can be ground into flour and then cooked into a variety of different food appearances so that they don’t have to look like insects. They can be chips! These are like corn chip, only better for you and the environment. The nutrition panel on the pack explains they are about 30% protein.
Now imagine what you can do with the burger meat above and these chips? Of course! Insect nachos! 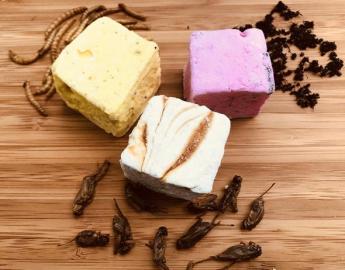 Then for desert? Insect marshmallows! Yep. That’s a thing! Australia’s Ediblebugshop.com.au sell them.