What are the benefits of New Urbanism? On this page:-

Good for the economy and productivity!

A groundbreaking study by Wei Pan, Phd student has demonstrated that as well-connected populations grow, so does the GDP — by more than the sum of the population. As the MIT summarises:

In 2010, in the journal Nature, a pair of physicists at the Santa Fe Institute showed that when the population of a city doubles, economic productivity goes up by an average of 130 percent. Not only does total productivity increase with increased population, but so does per-capita productivity.

So Wei Pan, a PhD student and first author on the new paper, looked at a host of factors that could be used to predict what the researchers are calling social-tie density, or the average number of people that each resident of a city will interact with in person. Those factors include things like the number of call partners with whom a cellphone user will end up sharing a cell tower, instances of colocation with other users of location-tracking social-networking services like Foursquare, and the contagion rates of diseases passed only by intimate physical contact.

It’s got to have an efficient transport system that is not choking to death in traffic.

The work could, however, have very real consequences for urban planning. For instance, Pentland says, there’s evidence that the principle of superlinear scaling does not hold in poor countries, even in cities with the same population densities as major European and American cities. “The reason is that the transportation is so bad,” Pentland says. “People might as well be in the village, because they only interact with their little local group.”…

…In Beijing today, Pan says, “it’s really hard to move from one side to the other. I believe, personally, that social-tie density will drop because you can’t really move freely anymore with the population increases. Unless Beijing solves these transportation problems, pumping in more people won’t continue to drive the density.”

Pentland adds that another figure that usually scales superlinearly with urban population is crime. But an exception to that rule is Zurich. “For various reasons, its population has exploded in the last 20 years,” Pentland says. “And they knew this was going to happen because of demographics. So they invested just an unholy amount of money in public transportation. You end up with this cloud of towns around Zurich, but everybody can get into Zurich in 15 minutes. More than 60 percent of the population moves into the center of Zurich during the day.” As a consequence, Pentland says, Zurich enjoys all of the productivity benefits of social-tie density with much lower crime rates.

While I love the internet, this effect is in the real world, and is human and physical.

“If you look at it from the standpoint of people who studied population density and urban density, what they’re showing is that it’s not just spatial concentration of people; it’s the associated differences in the social relationships among those people,” Macy says. “And then, from the network side, they’re pointing out that it’s not just a matter of network density but the consequences of network density for face-to-face interaction.”

As Citylab puts it:

Maybe this doesn’t sound like a novel discovery – that the inherent power of cities lies in our individual connections to each other. Other researchers have nipped at a similar idea, calculating, for example, the “social interaction potential” of place. But until recently, most economic thinking sidestepped the sheer value of human interaction in favor of explanations about the proximity of manufacturing, or the processes of production.

Bad infrastructure that divides us has the potential to wipe out the most fundamental benefit of cities.

The final limit of this effect? Citylab reports that while we don’t know from experience because we don’t have a measurable city that high, there is some modelling that says it might top out at 40 million! (Not that I’m saying we need cities of 40 million.)

Instead of burning oil, we could walk and burn calories. Evidence is coming in that suburbanites who move into New Urbanism gradually lose weight. Having placed everything they need within a 5 to 7 minute walk, they are more likely to walk instead of drive. They’ll walk to the park, pub, or pizza rather than drive. New Urbanites tone up and eventually slim down. That’s the trend. The research is coming in! As the wiki states:

The American Journal of Public Health and the American Journal of Health Promotion, have both stated that there is a significant connection between sprawl, obesity, andhypertension.[30] Many urbanists argue that this is due to less walking in sprawl-type developments. Living in a car centered culture forces inhabitants to drive everywhere, thus walking far less than their urban (and generally healthier) counterparts.[31]

The sociologists and other health professionals are starting to analyse how an attractive public space can affect how we relate to each other! Consider these questions: is getting together with your local community difficult? Does it only happen at artificially manufactured moments, or naturally in your everyday life? Does it take a school fete or craft fair to get your community together, or is there a real and deep sense of personal belonging as you walk down your local street into town? How long would such a walk take, and does that itself prevent you doing so? Can you honestly say that  meeting together with your community is an easy daily event that is a natural part of your daily life?

Health professionals are telling us that attractively designed public squares can both help local business and the social fabric of our community, which in turn makes us feel connected. This meets a profound human need, and has a  measurable effect of our mental health! For example, the Science Show (Dec 2009)  interviewed Professor Alex Haslam on the importance of friendships on mental function. Apparently being part of an active community can increase your own memory by 10% and decrease many other risk factors to your health. From the transcript:-

Alex Haslam: We’ve got a range of measures in different studies that we use. Some of them are just standardised measures of life satisfaction and wellbeing that are used by scientists in various walks of life. We have measures of clinical depression which are standardised measures, but I think interestingly too we have measures of cognitive performance and these are measures by neuropsychologists which are the standard measures you’d use in a medical setting. So, if you like, they’re the state-of-the-art measures of all of these states, and typically in intervention studies we get improvements where we attend to group life of about 10% to 15%, which is pretty significant.

And if I was to say to you, for example, in the case of some of our work, ‘I’ve got a drug that is going to improve your memory by 10%,’ people would invest a lot of money in developing that drug, they’d pay a lot of money for it, and the fact of the matter is we have that drug and the drug is us, it’s our community, and we need to get out there and built it and work with it and not rely on other people to develop solutions in laboratories. We are the laboratory and we have to be there at the coalface providing the solutions. 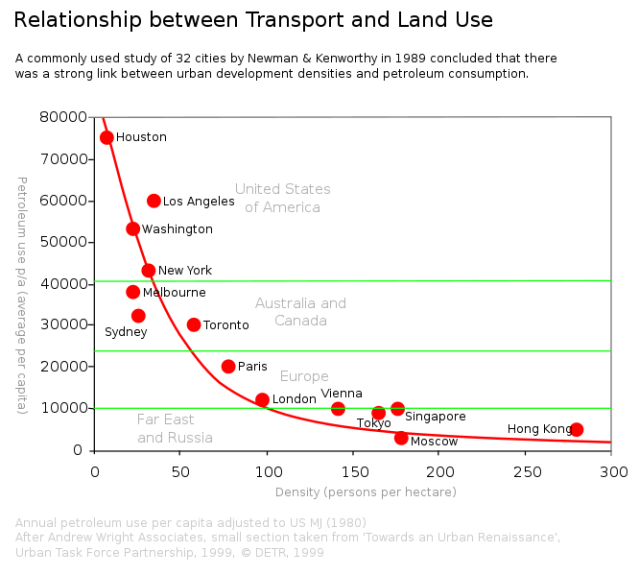 New Urbanism makes walking an option. Why drive, when a gentle 5 minute stroll will provide everything you need? Why waste time driving? Suburban shoppers often spend 20 minutes driving to the Westfield mall, 10 or 15 minutes driving around the car park, and then still have to walk 5 or 10 minutes to the shops across an ugly patch of bitumen! Add it all up, and that’s 50 minutes just to get there and back in a car, plus the actual shopping time. And they tell us that’s convenient? We’ve been conned!

Let’s turn the whole experience into an enjoyable 5 minute walk past friends and neighbours and local people we know and enjoy. Lets shop locally where the baker knows us, and cares about what we want. Lets shun the McMalls blasting Muzac at us, hypnotising us into some kind of trance like state for consuming. Let’s not be alienated, but connected.

As the wiki says:

A heavy reliance on automobiles increases traffic throughout the city as well as automobile crashes, pedestrian injuries, and air pollution. Motor vehicle crashes are the leading cause of death for Americans between the ages of five and twenty-four and is the leading accident-related cause for all age groups.[26] Residents of more sprawling areas are at greater risk of dying in a car crash.[27]

As The Conversation reports, the heatwaves of 2050 could kill 2000 people in Victoria alone, and smart urban design can reduce the overall temperature of a city without using any extra energy to do so!

Because it was such a passionate speech about New Urbanism, I featured the James Howard Kunstler talk on the first page. He argues that poor aesthetics in suburban environments make them “places not worth caring about”, and that they lack a sense of history and identity, and quickly degenerate into alienating societies not worth defending.

Save materials and embedded energy

If you make a city dense and diverse, you save on materials. You’ll need less roads and pavement, less power lines and telephone cables, less plumbing and drainage and sewers. You’ll save materials and energy and space. You’ll have less parking and more parks, less traffic and more trees, less frustration and more farms.

We need more green space to stay healthy, defeat depression, and even improve our memory. New Urbanism locates beautiful parks within a 5 minute walk of everyone. Instead of hundreds of kilometres of tarmac, we plant trees and gardens in a well maintained local park. (Some wealthier families will have their own backyards, and even eco-apartment tenants should have access to gardens).

Good New Urbanism creates vital cities that have self-sustaining local economies relying on relatively close local ecologies. (Where possible). That is, any green-field gains we get from collapsing suburbia back into vital city cores can be returned to parklands, farmlands, or pasturelands. It is most likely that the best use of the land is probably not to try and return it to a nature bandaid — an isolated pocket of attempted wildlife, but some form of forestry or agriculture that meets our vast needs for fuel and fibre. However, if in some situation

More details on New Urbanism, further defining the neighbourhood, town, city, and showing how driving to the town square ruins it, the historical legacy of racist highway development, and how developers want to ruin public spaces.

The Eco-city, bunched in more and covered in trees and bushes.

The Eco-Village: the opposite of the above!

Which style for Sydney?

Rail: is so much better than cars

How to get there, given we’ve already spend so much on suburbia?

Fast homes: Don’t eco-apartments take a year or so to build, and cities take decades?