Coal kills 2.6 million people annually, which is just short of 1.75 Chernobyl’s per day or 650 Chernobyl’s a year!

Today’s Gen3.5 reactors would have passive safety, which means engineers can just walk away from an over-heating event as the reactor cools itself. The AP-1000 would easily withstand a Fukushima scaled power-failure. They not only have far safer, simpler, stronger cooling pumps, but if something knocks out all external cooling systems the reactor cores themselves have ‘passive physics’ built in. Put simply, they are designed to cool themselves. They remove the need for Homer Simpson to push the right buttons. They are self-cooling, even without power or humans.

We have seen that nuclear power is already the safest main provider of power today. But they’re making them even safer. Before I start my anti-water rant, please remember what we saw above. Even old Light Water Reactors are already thousands of times safer than coal. I say this because China is about to build a whole new generation of breeder reactors that still use water as a coolant, and I support that. It is better to use light water reactors than no reactors at all.

But nuclear can be even safer without water. Why? It’s all about pressure. Water has a fundamental problem in producing electricity: it flashes to steam at over 100 degrees. Steam doesn’t spin turbines and make our electricity as well as water does. The answer: we squish the steam back into water at very high pressures. We trap the water at very high pressures.  But it also means that all the plumbing and pipes and reactor core are under very high pressure. Water reactors run at 150 to 246 atmospheres!  Liquid wants to flash to steam and expand outwards like a bomb exploding. Chernobyl and Fukushima were as bad as they were because of high pressure water.

But this makes Light Water Reactors more expensive, as the reactor core basically becomes a giant pressure cooker! Look at the size of the reactor ‘flange vessel’ below. 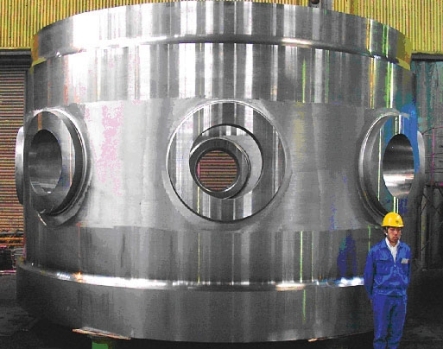 It is enormous, and cast out of one single piece of steel about 16 cm thick. That’s like casting a 2 story room in one mould! There are only a few forges in the world that can do that. This is why water reactors are not easy to mass produce, and why they’re more expensive. All because of that high pressure. Both the Integral Fast Reactor and Molten Salt Reactor run at much lower pressures. The reactor core can be broken down into smaller parts and mass produced on an assembly line. The lower pressure makes alternative non-water reactors both safer and cheaper!

Steam takes 1000 times the volume of water. If water bursts out and flashes to steam, the it will expand to under enormous force. To stop radioactive steam exploding out (as happened at Chernobyl) requires an enormous containment dome over the reactor.  This also adds to the expense of nuclear power.

* When split, water can explode.

If a Light Water Reactor melts down, the reactor is overheating and can split the cooling water into oxygen and hydrogen! The heat can ignite the hydrogen, and then you have an explosion. This is what happened at Fukushima, blowing the containment building roofs off. The Fukushima explosions were not small nuclear explosions. The reactor cores did not explode! Instead, it was like the ‘squeaky pop’ hydrogen test many junior high school students do, only on a massive and dangerous scale.

Older reactors like Chernobyl or Fukushima required power to cool. New reactors will require power to go! Fukushima melted down because it needed power. The tsunami destroyed the backup generators, power failed to the plant. Game over. But new reactors are self-cooling, without people or power! They have various ways of leaking heat, passively, using the liquid metals or liquid salts that replace water, as described above.

Instead, newer reactors use other fluids to replace water, avoiding the dangerous pressure and expense to contain it. As already stated on the summary page, there are reactors that use liquid metals like sodium and others that use liquid salt. Again, this makes them both safer and cheaper.

Let’s build Nuclear Energy Parks out in the Australian outback  away from any population areas. If some weird disastrous fluke managed to take one of these out, new reactors would be built 500 kilometres upwind and we’d just quarantine a tiny fraction of our vast deserts for a few hundred years. We’d hardly notice it. For example, I haven’t been inconvenienced by the Woomera Testing Facility being off-limits, and it is twice the size of Tasmania! Power lines to the desert energy park would still be vastly cheaper than the power lines for a continent-wide renewable grid. Wind and Solar must have a continent wide super-grid to bring the power from our coasts and deserts to where we live.

5. What about radioactive leaks?

In summary, a little radiation is not that bad, and banning safe modern nuclear power because of Chernobyl or Fukushima is like banning modern aviation because of the Hindenburg! For more please click here:-  Chernobyl, Fukushima, Radiation Oh-My?

6.What about nuclear bombs and terrorism?