‘Dark Tourist’ is a Netflix series that films tourists going through some of the more troubled places on the planet. It might be interesting for scenic shots, but seems to have very low levels of scientific input.  In other words, it’s sensationalised nonsense when covering important complicated scientific issues like radiation.

The moment the narrator said “It’s surprising that thieves haven’t looted the place. Maybe they know something we don’t,” I groaned out loud. “Here we go” I thought. “More pop-culture rubbish — what are they going to reference next, Godzilla?”

Then it happened. Apparently the tour guide had told them that their Geiger counter should read 0.2 for safe readings. 0.2 what? The show didn’t discuss the units of radiation, the worldwide background averages in Tokyo, New York, or Sydney, or what kinds of radiation the Geiger counter is even counting and how it is doing it!

No. That’s too hard for a Friday night ‘beer and pizza’ format show. Then they stereotypical highlighted a lady to hold up the Geiger counter and exclaims, “Oh my god! 0.72!” Then the camera zooms in, and it’s just jumped to 0.73! But the tour guide said it should only be 0.2.

The narrator says something about reconsidering whether radiation tourism is such a good idea, and they all stand around in an abandoned, dusty garage looking glum. But what does the Geiger counter even show, and what does it all mean?

First of all, let’s examine the reading. 0.73 μSv/h means 0.73 micro (μ) Sieverts (Sv) per hour (/h). You can read more technical information about it at the Sievert wiki, but it basically takes the 3 types of alpha, beta and gamma radiation in an area, and — because these 3 hit at different strengths — calculates their total biological impact on your body into one number.

PBS summarises it as:

One sievert, the unit measurement for a dose of radiation, will cause illness if absorbed all at once, and 8 sieverts will result in death, even with treatment. According to the chart, the average person safely absorbs about 3.65 millisieverts (or 0.00365 sieverts) of radiation annually, through simple activities like living in a brick or concrete building (70 microsieverts a year) or sleeping next to another person (0.05 microsieverts). A person living within 50 miles of a nuclear power plant absorbs 0.09 microsieverts of radiation per year, which is less than the amount absorbed by eating a banana.

It’s not even twice the normal mSv/year you are taking right now by living in Sydney! In other words, let’s back convert the 3.65 milliSieverts into hourly microSieverts to get a Geiger-counter reading for Sydney. Multiply it by 1000 = 3650 micro-Sieverts per year, then divide by 365 days = 10 micro-Sieverts a day, divide by 24 = 0.42 micro-Sieverts per hour. Sydney is ‘hotter’ than the tourist guide’s ‘safety limit’ of 0.2 mSv/h! So I don’t know where that tourist director got his information, but he would have you creeped out walking around SYDNEY with his Gieger-counter alarmism. “Hey, Mr Tourist guy, I thought it was supposed to read 0.20 something and oh my god! It says 0.42! Are we going to get sick? Maybe this SYDNEY tourism thing isn’t such a good idea!”

But the Charles Sturt University’s “Radiation Safety Committee” said that around the world some rare places have 50 milli-Sieverts (50 mSv) a year of natural radiation with no discernible health impacts.

Now let’s forget Chernobyl and Fukushima and discuss RAMSAR INDIA? What, never heard of it? That’s because there’s no nuclear power plant to boogey-man and freak out about. But people don’t understand that this is still radiation we’re discussing, and it still equates into milli-Sieverts of action on the body — whether the source is our nuclear power plants or natural radon gas from the decay of uranium and thorium particles. Here is the wiki as of September 2018, but the take home message is that Ramsar’s building materials have had doses as high as 143 µSv/h, or 909.48 mSv/year — nearly a whole Sievert a year! Lastly, people live at Chernobyl or Fukushima, yet RAMSAR is the most radioactive inhabited place on earth. So much for objective reporting about radiation! “Dark tourist” should have been touring Ramsar. I guess without an abandoned area and busted up nuclear power plant to blame, it just doesn’t make as good a story. Hey, showing people living in a vastly more radioactive environment with debatable — not obvious and horrific! — medical impacts might even confuse the anti-nuclear zeitgeist of the modern world. We can’t go confusing the population with scientific data on this subject — because “Lions and Tigers and Bears! Oh My! Chernobyl, Fukushima, and Godzilla, Oh my!”

Over to the wiki:- 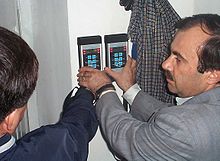 Two survey meters show dose rates of 142 and 143 µSv/h on contact with a bedroom wall.

Ramsar’s Talesh Mahalleh district is the most radioactive inhabited area known on Earth, due to nearby hot springs and building materials originating from them.[8] A combined population of 2,000 residents from this district and other high radiation neighbourhoods receive an average radiation dose of 10 mGy per year, ten times more than the ICRP recommended limit for exposure to the public from artificial sources.[9] Record levels were found in a house where the effective radiation dose due to external radiation was 131 mSv/a, and the committed dose from radon was 72 mSv/a.[10] This unique case is over 80 times higher than the world average background radiation.

The prevailing model of radiation-induced cancer posits that the risk rises linearly with dose at a rate of 5% per Sv. If this linear no-threshold model is correct, it should be possible to observe an increased incidence of cancer in Ramsar through careful long-term studies currently[when?] underway.[9] Early anecdotal evidence from local doctors and preliminary cytogenetic studies suggested that there may be no such harmful effect, and possibly even a radioadaptive effect.[11] More recent epidemiological data show a slightly reduced lung cancer rate[12] and non-significantly elevated morbidity, but the small size of the population (only 1800 inhabitants in the high-background areas) will require a longer monitoring period to draw definitive conclusions.[13] Furthermore, there are questions regarding possible non-cancer effects of the radiation background. An Iranian study has shown that people in the area have a significantly higher expression of CD69 gene and also a higher incidence of stable and unstable chromosomal aberrations.[14] Chromosomal aberrations have been found in other studies[15] and a possible elevation of female infertility has been reported.[16]

Radiation hormesis was not observed in a study that also recommended that Ramsar does not provide justification to relax existing regulatory dose limits.[17] Pending further study, the potential health risks had moved scientists in 2001–02 to call for relocation of the residents and regulatory control of new construction.[18][19]

The radioactivity is due to the local geology. Underground water dissolves radium in uraniferous igneous rock and carries it to the surface through at least nine known hot springs.[11] These are used as spas by locals and tourists. Some of the radium precipitates into travertine, a form of limestone, and the rest diffuses into the soil, where it is absorbed by crops and mixes with drinking water. Residents have unknowingly used the radioactive limestone as a building material for their homes. The stone irradiates the inhabitants and generates radon gas which is usually seen to promote lung cancer. Crops contribute 72 µSv/yr to a critical group of 50 residents.[20]

This entry was posted in Nuclear, Radiation. Bookmark the permalink.