“Doctor” Helen Caldicott is a fraud 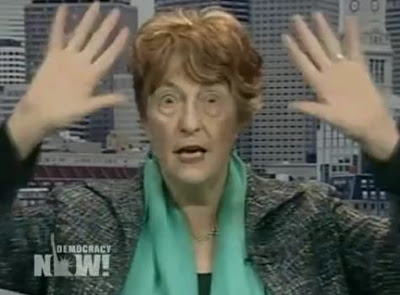 “Doctor” Helen Caldicott is a paediatrician, not a nuclear radiation expert. Her husband is a radiologist, but she is not. She’s a children’s doctor.
https://en.wikipedia.org/wiki/Helen_Caldicott

Helen debated George Monbiot on Democracy Now, and sounded like a rabid conspiracy theorist rather than a balanced, objective scientist.

George asked her to verify her claims, to which she merely appealed to her own book. George then committed to studying her work and her sources, and found that her books are largely self-referencing, unverified, and verging on scientific fraud. She relies on anti-UN conspiracy theories rather than peer-reviewed work! George was so alarmed he accused her of treating peer-reviewed science like a climate denialist would!

“The scarcity of references to scientific papers and the abundance of unsourced claims it contains amaze me.”

See also: “Anti Nuclear Lobby has misled us all.”
http://www.theguardian.com/commentisfree/2011/apr/05/anti-nuclear-lobby-misled-world

George replied again, basically calling her a fraud. Check his claims! Try to verify her work! Could it be the world has been taken in by someone rabidly ranting against our safest, cleanest and most reliable alternative to coal (the real killer)?http://www.theguardian.com/environment/georgemonbiot/2011/apr/13/anti-nuclear-lobby-interrogate-beliefs

Helen’s claims about Fukushima are entirely rabid. Yes there is a small statistical increase in the chance of cancer. A fit Japanese person that moved home to Fukushima might then have the same risk of cancer as an obese Westerner. It’s about choosing risks: very high levels of depression and suicide in evacuee communities of internally displaced people, or a mildly increased chance of cancer?

Half of her claims about nuclear power simply are not true in the first place: she appears to have a poor understanding of the very industry she rants against!
http://bravenewclimate.com/2015/06/18/complaint-about-misleading-helen-caldicott-article-in-the-saturday-paper/

Worldwide, coal and oil and gas choke nearly 3 million people to death, which is about 2 Chernobyl’s every day!

Basically, I feel sorry for people that have interviewed Helen as some kind of ‘authority’, as they haven’t had the objectivity to check her qualifications, her claims, and her rabid anti-nuclear obsession. She has about as much credibility as the “Moon landing was faked” crowd. Handle her material with care! It seems to be catching.

1 Response to “Doctor” Helen Caldicott is a fraud