I always thought wind and solar had a pretty good ERoEI which stands for Energy Return on Energy Invested, or Output / Input, or how much energy you get back after counting the energy it took to build the solar PV unit or wind farm in the first place.

I thought that solar PV produced something like 7 to 10 times as much energy as it took to make the solar PV, and wind had an energy profit of somewhere between 30 to 50!

First of all, on the positive side, we don’t have to use one technology exclusively. Grids are big things and using a mix of solar and wind ensures that there will be a lot of energy flowing a lot of the time. But many experts I read have calculated that to really get through tough winters, some European countries might need as much as a week of backup. Given that there are 52 weeks in a year, that’s not very much backup: not as much as I feared renewables might need given that solar PV only pumps out maximum electricity a quarter of the day.

How do we store a week’s worth of energy? In batteries? Not really. Given batteries only have a limited number of times they can be charged and recharged, their lifetimes are just far too short to be economical. The main ‘battery’ with the longest lifespan is pumped hydro power. When you have extra power, pump water up a hill into a hydro dam, and then when you require that power, let the water rip. Unlike batteries, hydro dams can last 100 years!

The problem is that hydro dams — one of the most efficient ways of storing vast volumes of energy — take so much energy to build. The renewable ERoEI’s drop off a cliff. This is where most life cycle analysis of renewable energy are fatally flawed. They only measure the ERoEI of the solar PV or wind farm itself. They ignore the energy cost of building the storage that is supposed to make the wind farm viable. As you can see, when ‘buffered’ to account for storage, solar and wind ERoEI roughly halves. 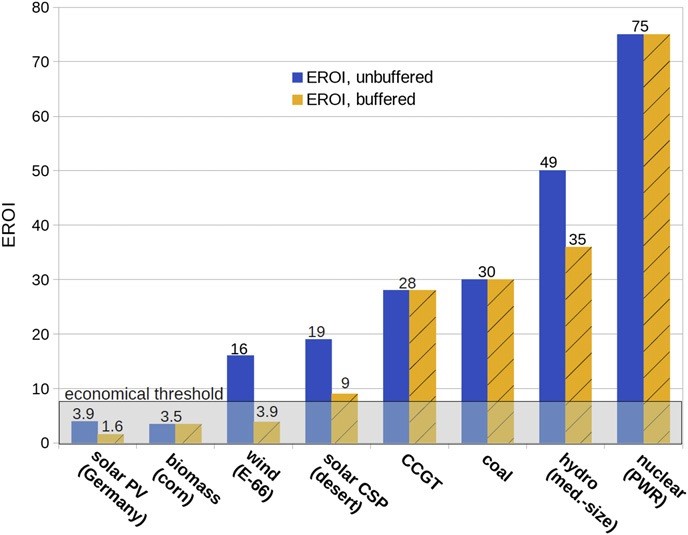 But what about thin film solar PV? I have heard it argued that thin film has an ERoEI of 60 or more, therefore the ERoEI with storage will only be halved back to 30, more than enough energy to run society. Wrong.  It gets such a high EROEI by being 15 times more energy efficient to produce, not producing 15 times more actual electricity. Sadly, it still produces roughly the same amount of energy as regular PV. So the same amount of output is still divided by the same energy cost of storage, however little energy input went into making the thin-film PV.

In fact, the thin-film could hypothetically be ‘free’ to make (with no energy cost) and it wouldn’t really change the overall ERoEI at all. The massive investment in building a huge pumped hydro dam or battery bank still dominates!
All this for a relatively small amount of storage.

This entry was posted in Solar and tagged EroEi, solar. Bookmark the permalink.

1 Response to Fossil fuels in disguise